Menu
How to identify Hydroxychloroquine’s ON and OFF targets to design a more potent molecule with enhanced clinical efficacy and reduced retinal toxicity in comparison to HCQ?
Email
Print
HYDROXYCHLOROQUINE IDENTITY CARD

Toxicity
Over long period of medication or exposition at high doses, HCQ increases the risk of eye damage, including vision changes and induces rare but irreversible retinopathies (3-5%).1 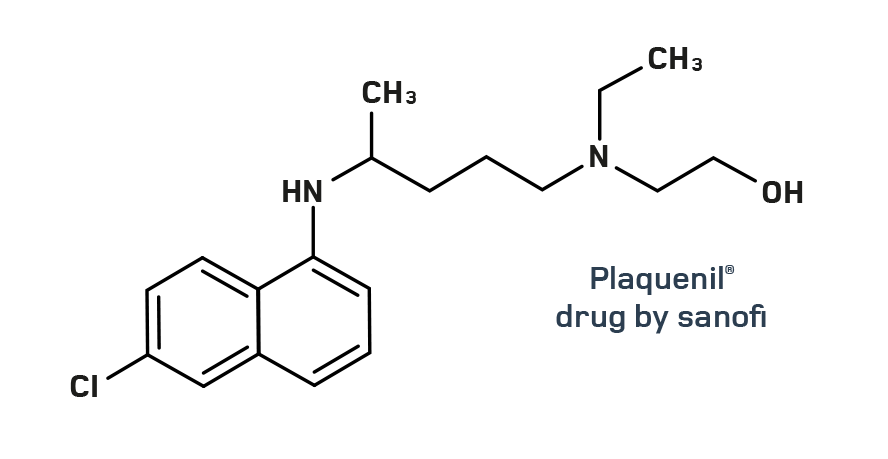 Peripheral Blood Mononuclear Cell (PBMC) lysates from 20 lupus patients under treatment and retinas from 5 mice were used to perform NPOT® experiments in combination with HCQ, in order to identify HCQ’s ON and OFF targets that could explain its anti-inflammatory activity and retinal toxicity.

MPO has an antimicrobial activity4 and is a key enzyme for neutrophil extracellular trap (NET)5 that explains very well HCQ’s anti-inflammatory properties (figure 1).

αB-C is however known to be expressed in many parts of the retina6 and vitreous fluid. Recent studies have shown that αB-C promotes tumor angiogenesis7 and retinal neovascularization8.

The biophysical interaction of HCQ with its targets has been validated by SPR (Biacore 3000®): Kd of 7,1.10-7M on MPO and 2,2.10-8M on its OFF target and functional assay by quantifying HCQ’s influence on the MPO activity (figure 2).

With the aim of loosing the OFF binding interaction, a serie of analogues has been designed and synthesized (in collaboration with the University of Strasbourg, France) based on the chemical structures of MPO and αB-C. The candidate INS-072 has been selected for its enhanced anti-inflammatory properties (INS- 072 EC50 = 6,9.10-9M vs HCQ EC50 = 1,9.10-7M), for its greater efficacy against dermatitis appearance in the MRL/lpr mice model that is known to spontaneously develop Lupus symptoms (figure 3A) and finally for its reduced  emergence of retinopathy (figure 3B) in the C57Bl/6 mice model that is sensible to visual damage.

Figure 3:
A) Representation of the pourcentage of dermatitis appearance over time (in days)
B) Analysis of the cornea Integrity (in pourcentage of retinopathy)

Thanks to NPOT®, Inoviem Scientific was capable of identifying and validating, not only HCQ’s ON & OFF targets (Myeloperoxydase and alphaB-crystallin) that explain its unknown mode of action, but also a new drug candidate with a better efficacy and reduced side effect observed on mouse retinas in systemic autoimmune disease.

Preclinical
From preclinical to clinical
Clinical

Our mission
Our commitments
Our values
Our team

This website uses cookies to improve your experience while you navigate through the website. Out of these, the cookies that are categorized as necessary are stored on your browser as they are essential for the working of basic functionalities of the website. We also use third-party cookies that help us analyze and understand how you use this website. These cookies will be stored in your browser only with your consent. You also have the option to opt-out of these cookies. But opting out of some of these cookies may affect your browsing experience.
Necessary Always Enabled
Necessary cookies are absolutely essential for the website to function properly. These cookies ensure basic functionalities and security features of the website, anonymously.
Functional
Functional cookies help to perform certain functionalities like sharing the content of the website on social media platforms, collect feedbacks, and other third-party features.
Performance
Performance cookies are used to understand and analyze the key performance indexes of the website which helps in delivering a better user experience for the visitors.
Analytics
Analytical cookies are used to understand how visitors interact with the website. These cookies help provide information on metrics the number of visitors, bounce rate, traffic source, etc.
Advertisement
Advertisement cookies are used to provide visitors with relevant ads and marketing campaigns. These cookies track visitors across websites and collect information to provide customized ads.
Others
Other uncategorized cookies are those that are being analyzed and have not been classified into a category as yet.
SAVE & ACCEPT
Powered by